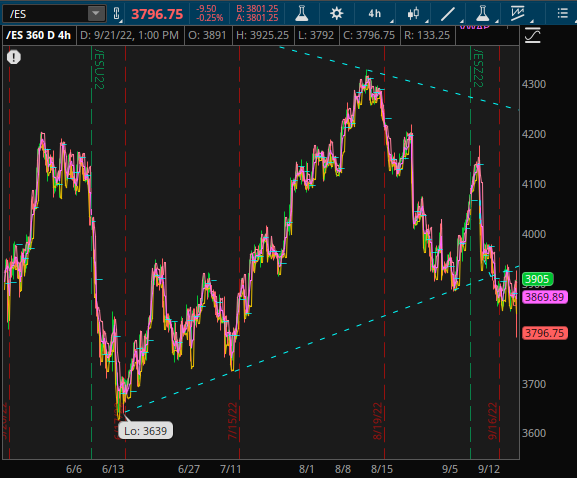 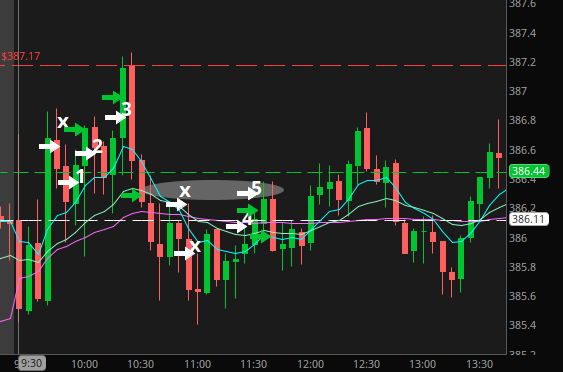 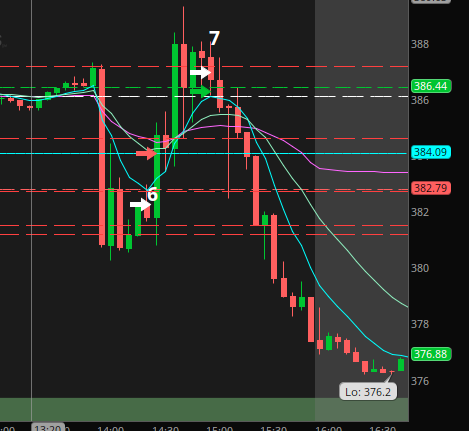 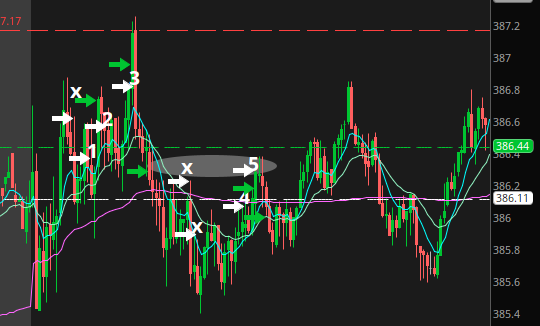 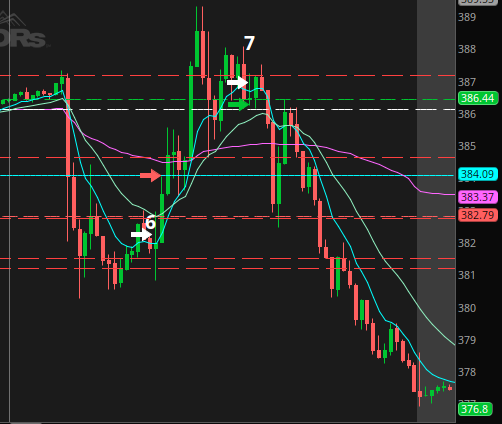 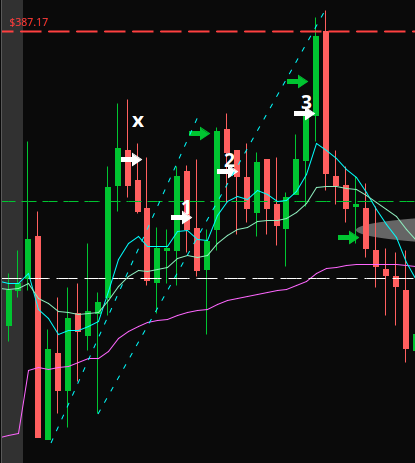 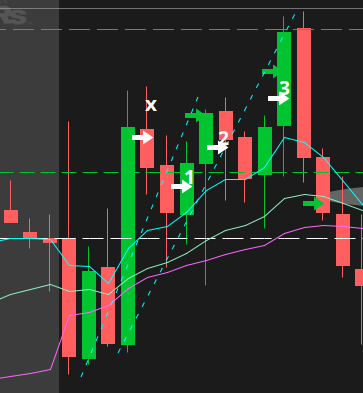 First of all we have some big resistance that we are sitting right above. Secondly, its the FOMC day so pretty much all options trading at the beginning of the day needs to be avoided at all costs. When we have very strong IV then its really not worth it to take anything other than extremely fast scalps and on this trade right here (#1) I took the first trendbreak of the day but I was drawing the trend directly through wicks which is something I should never do. When I do that I basically am manifesting my own FOMO because drawing through wicks allows you to manipulate the price action to adhere to your biases. If the wicks are there then the price went there so I need to not be ever making trendlines while also drawing through candles. Need to be avoiding trades like this at all costs.

Yet again same problems as the last trade. No trading before high IV moves unless its with shares. And do not draw trendlines through candles. On the first trade I used that left trendline and on the second I used the right. You can see that I drew through candles on both of these trends. I will show you the correct and highest EV plays right in the picture below. 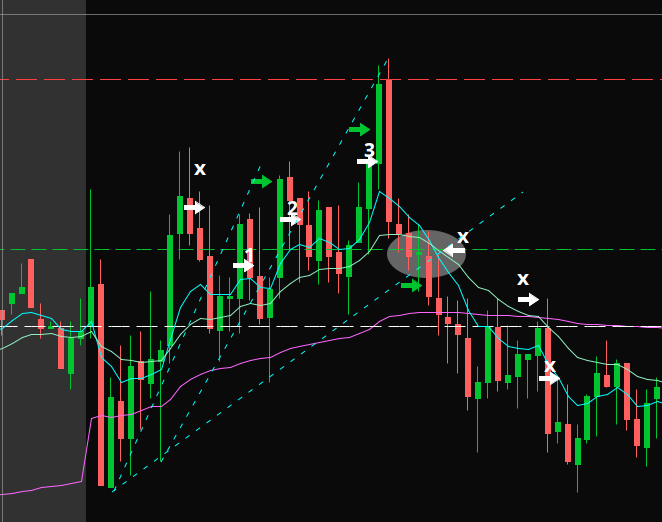 See how This bottom trendline actually connects with all candles? I am skipping over trade #3 for now but ill get to it after this analysis. Checkout the oval area and the leftward facing white arrow labeled (x). That is where the true trend lay and you can see that we broke that trend then immediately spiked back up and it gave the best continuation and highest expected value play of the entire morning. That was the trade I wouldve taken had I not been so eager to take those earlier shittier setups. I need to be waiting for only these trades and intensely finding out different ways to wait that long, for the perfect opportunity.

This was a decent trade only in the fact that I realized that my first 2 trades were too early and this was a perfect bearish engulfing momentum shift/fakeout to the highs/failed move higher trade. I dont like it that much because still I am on the wrong side of the V until we get to that example I just posted that I missed. I had taken this same exact trade 2 days ago and got stopped out at the high perfectly just like this example above. Let me show you:

See that trade labeled #3/ That is this same exact setup. It broke the previous high and failed immediately with a big bearish engulfing candle then we continued much lower very fast. This exact trade that I fucked up 2 days ago (stopped out at perfect high and didnt re-enter) came into my mind the moment I was about to do the same thing on todays sessions. When I stopped out and saw that break of high and big false move higher I jumped right back in and made back about half of the losses from the first 2 trades. I was still down about $25 after this win. Again, I really think that if I was perfect and had ideal trades all of the time I wouldve just avoided the first 2 trades, taken the 3rd with smaller size, then nailed that X labeled trade that is the exact trend break. That is the #EV play by far but im not a beginner sometimes I can take quick scalps like I took on #3 and really give myself these mini cushions to allow myself to size more later in the session if we get clear moves. 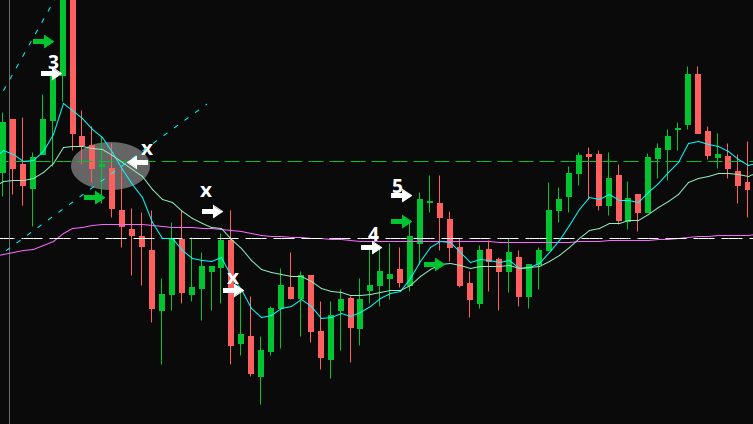 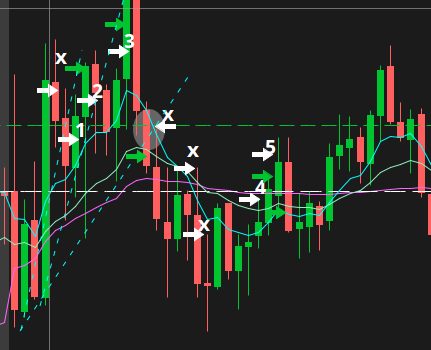 Im truly embarassed that I even took these trades because they didnt do shit but rack me up in more fees. Its just fucking stupid idk why I even thought for a moment to take these. I was pretty much just bored and saw we triple topped and was making food so I took a trade with a $10 stop and a $10 target and entered at that top and then stopped out. Right after I did it again just for no reason and its just fucking idiotic to think that I should be taking trades for the fuck of it. This is not meant to be some stupid ass game where I just take trades cuz im bored, I cannot allow behavior like this if I want to be as successful as I know I can become. Both of these are considered range trades because I assumed we were just going to go sideways up until FOMC and I was right on the second trade so I made back what I lost on the first trade but if I was wrong on both of these I wouldve dug myself an even deeper hole for no reason whatsoever. They are not clean they are not good and they are not trades that a professional would take, only a gambler.

okay now we have the fun part heheh 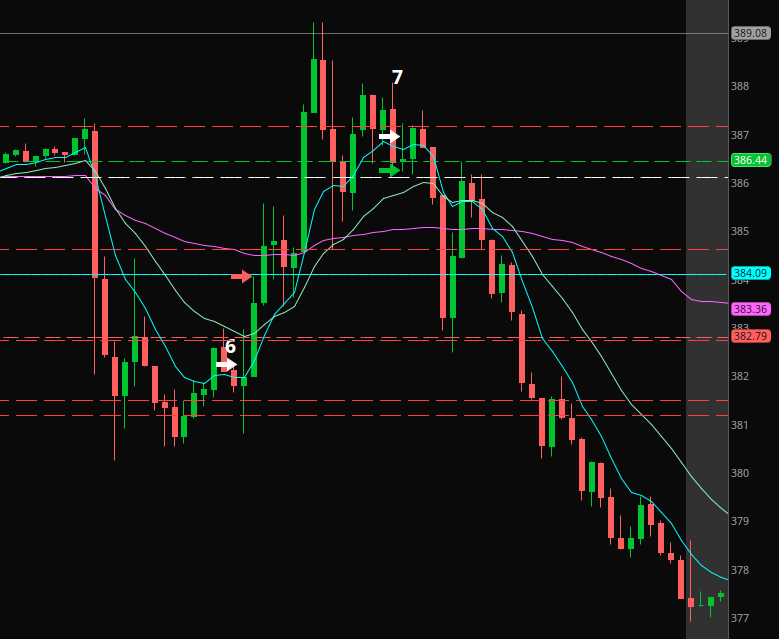 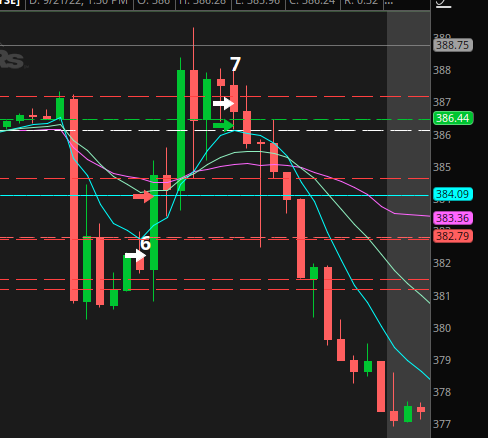 This was after the FOMC meeting and idk why these shit trades get me so hyped up but god damn this was some fucking fun. This is what I was mostly looking at for these trades. 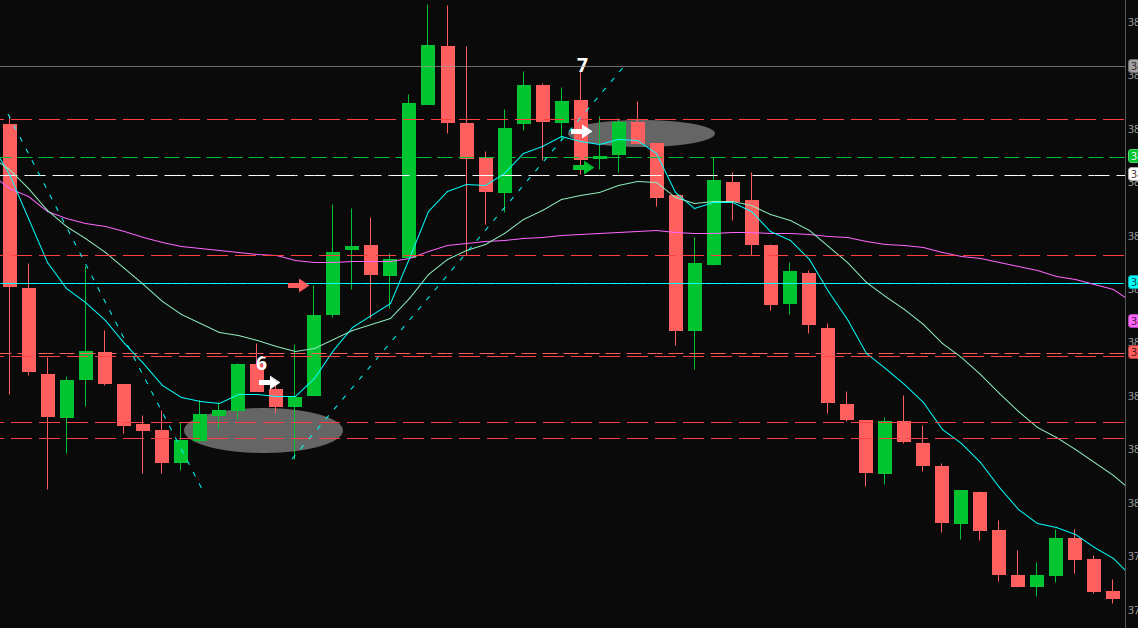 We had a nice downwards trendline that occurred right at 2:00 and my thesis for these late day moves (thanks to a youtube video I saw this morning lol) was that everytime we had an FOMC meeting we dump for first half hour and then once JP starts talking we rally back up into the close. So when we dumped I was waiting for that 2:30 mark and seeing if a long setup was going to happen. Luckily, it happened and I pulled the trigger on about a 20 delta contract (which is super fucking cheap and not that volatile) and I put about a $20 stop and a $50 profit target. We started moving lower right when I got in and then we got to about -$23 on the option and luckily I moved my stop a little lower to base it more off the price action rather than my own fear of losing money. We bounced perfectly off of my stop and I waited for that clear break of the previous high because I knew if we broke that we would move strongly higher. I took profits right at previous day close because its the previous day close haha. I went from -$26 after this mornings trades to +$26 and unrealized I was down about $50 while I was in this trade. So that felt really nice to not be so scared and to truly trust my system and see if it was going to work and it fucking did. Then on trade #7 I had the exact same principle. Waited for the trend to break and saw that we were at previous supply but I was skeptical to go short because we usually rally much higher so why would I fight the trend? Plus we were still holding a higher low technically and we couldve used that as support to go higher. I knew these contracts were so volatile that I could probably scalp this move lower very fast and make a quick little trade. I got in on the bid and had about a $20 profit target and I was in the green immediately and took profit at +$17 on this tiny scalp. Again the trade was based on the price action adn the move lower so I really wasnt just gambling here like most of the FOMC trading seems to be. I wait for a clean price action setup and I didnt hesitate. It is so cool to finally see the fruits of my labor working out. 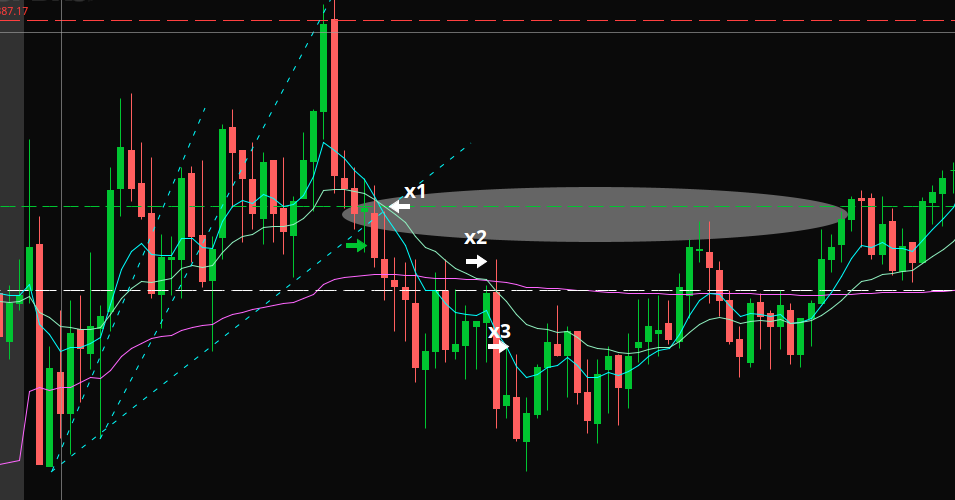 We already talked about the first missed trade being the first actualy price action based trend break that was not based on fomo but only on the true trend. The 2nd missed opportunity happened on the retest of that trend break zone. Although, this trade wouldve been very difficult to take. We really only had a triple top and it didnt really test that zone very good. In general this is not a good trade but rather just a really nice clean move and I will always take any chance I can find to identify any other nuances of this trend reversal strategy. Someday in the future if I see an ugly day like this I can remember that if I see some weird formation where we have a triple top on a backside breakdown that wont retest the trend break level, I may just be that much more likely to take it. In the future that could be a thousand bucks for just a quick scalp. Missed trade #3 was just a clean trend continuation trade to the downside. We broke that little uptrend and failed at vwap then had a huge bearish engulfing candle. Again, its really not great just because we dont have much to base it off of besides that last zone that I just talked about (oval area aka Trend break retest zone). I wont give too much emphasis on this either just because its not too pretty. 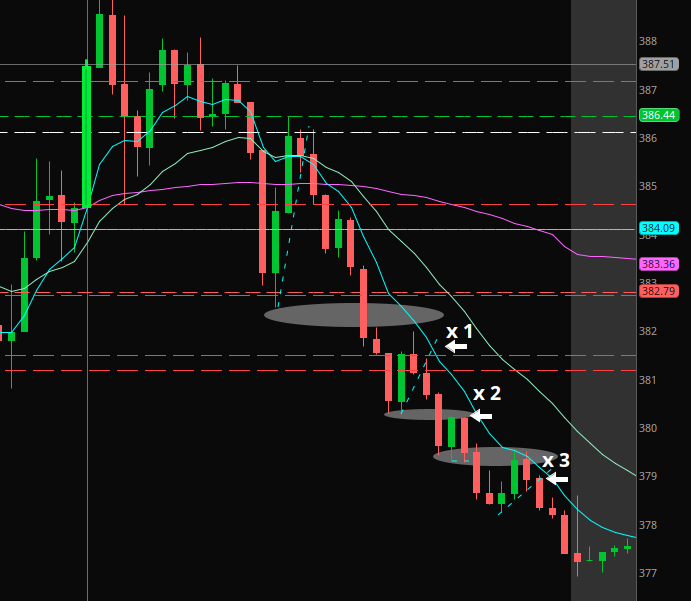 Here are some Post FOMC trades that have some potential. Since we broke back below previous day close and broke that uptrend we created after the initial drop from FOMC the momentum shouldve been identified to be downwards from me. If we have a bullish engulfing candle and THAT candle gets engulfed, well good fucking luck cuz we are going down. 2 engulfing patters together usually end in the first engulfed push. Let me show a larger timeframe. 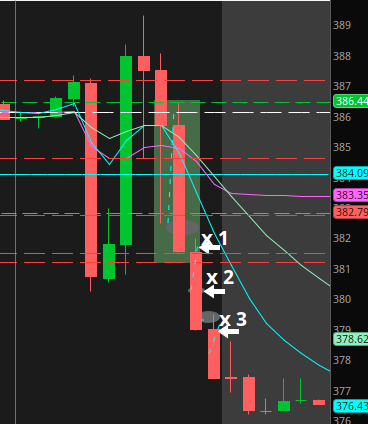 See how that first green candle engulfed the entire red move? Then right after we engulf the whole green candle. That is clear indication that sellers are taking over now. If we have strong buyers like that that can push up that entire red move and THEY get eaten by sellers then its pretty safe to assume more of them are scared off and they will not be able to jump right back in and hold it up. Its like tug of war, sometimes you are winning at first by a wide margin, then the other team starts to pull you closer to the line once you think that you are about to win, but then they lose momentum and your team pulls them back the whole way to the line. Who do you think is going to win?